SIMRIS ALG The detailed insight into Simris’s development plan shows several interesting projects and potential applications of the company’s biotech algae platform which, although difficult to quantify in terms of commercial potential, has many similarities with companies in the algae industry where transactions are currently being made internationally in the hundreds of millions of dollars. With a continued shift of focus onto all of the company’s three strategic businesses, we see good prospects for a reversal of the lukewarm sentiment towards the share.

The publication of Simris Alg’s annual report and associated development plan provided a surprisingly meaty account of the company’s focus going forward and the markets the company addresses. Following the announcement of its three-pronged business focus presented in February, the company now offered further details about its development plan, with new candidate products and the upcoming milestones.

Of particular interest was the insight into the BIOMIMETICS project portfolio, which offers the company’s biotech algae platform for discovery and production of various types of active substances for advanced skin care and pharmaceuticals. In addition to two formulations for advanced skin care (cosmeceuticals) that are expected to reach the B2B market in 2022, the company has three more projects undergoing in vitro trials for advanced skin care (SBMtfX: transcription factors involved in the cellular mechanisms behind atopic dermatitis (eczema); SBMfuX: a functional polysaccharide with anti-inflammatory and prebiotic properties; and SBMcaX: enzymes that capture free radicals and skin-protecting function, which is more advanced than the other two, having achieved proof of concept).

However, it is worth noting that the company’s investment in the development of production methods for second-generation bio-based drugs has a less prominent position in the company’s development plan. The idea of using microalgae as a production platform in recombinant DNA technology has the potential to offer significant advantages compared with “more difficult” cell lines such as mammalian. But judging by the development plan, any such development project must now be assumed to be further in the future. The market for active ingredients alone is worth over USD 2 billion, with the market for biotech ingredients estimated to amount to several hundred million dollars and expected to grow strongly.

However, the commercial potential of BIOMIMETICS and the other business focus NOVEL FOODS, where the company’s algae-based protein powder is considered to have the greatest commercial potential, is very difficult to determine with any great certainty. The strategy for BIOMIMETICS is entirely focused on B2B, which makes it particularly important to understand the niche in which Simris operates.

Major deals in the industry

China and Europe, especially France, are important hubs in the market for active ingredients for advanced skin care. While Simris has a unique algae platform to offer partners in several different application areas, it is not alone, although there are few listed players. The fact that the microalgae industry is attracting attention internationally is clearly illustrated by, for example, Qualitas Health/iwi’s investment round earlier this year totalling USD 22.5 million at a valuation of USD 73 million post-money to finance its investment in protein based on microalgae that is expected to reach the market in 2022. Or the Solabia acquisition of Israeli Algatech in 2019 at an estimated value of USD 100 million, according to financial site Calcalist; and Microphyt’s financing round in 2019 of EUR 28.5 million for the development of nutritional active ingredients, cosmetic active and functional ingredients. All of these, and many other similar companies, operate in areas close to Simris. Although these are in some cases competing technologies and products, the field of potential technologies and areas of application in microalgae are very wide, which means that there are probably significantly more synergies than overlaps between the companies. 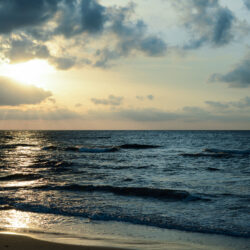 Broader portfolio paves the way for revaluation of Simris stock

Following its major breakthrough with omega-3 products in the United States, Simris is harvesting the initial results of development efforts in its second vertical, cosmeceuticals. The company is also evaluating a number of exciting pharmacological applications, and now that it has reinforced its finances, the way is paved for a revaluation of the share.

High potential, but difficult to quantify

All in all, the conclusion is that Simris Alg is a highly interesting VC case at the forefront of biotechnology, which has unfortunately been weighed down by tunnel vision on the short-term sales growth in the company’s first product area, omega-3. With a continued shift of focus to all of the company’s three strategic operating areas, we see good prospects for a reversal of sentiment towards the share, and increased chances for the company to attract a new kind of investor who has a greater understanding of the extended investments and long-term potential, even though this is difficult to quantify in the short term. But with the international heavyweight Steve Schapera, Probi’s former CEO Peter Nählstedt, and Robert Quant, who has a background as CFO and COO for Berlin-based Invincible Brands, joining the board, we envisage opportunities for an interesting news flow from Simris Alg going forward and a high but difficult-to-quantify potential for the stock. 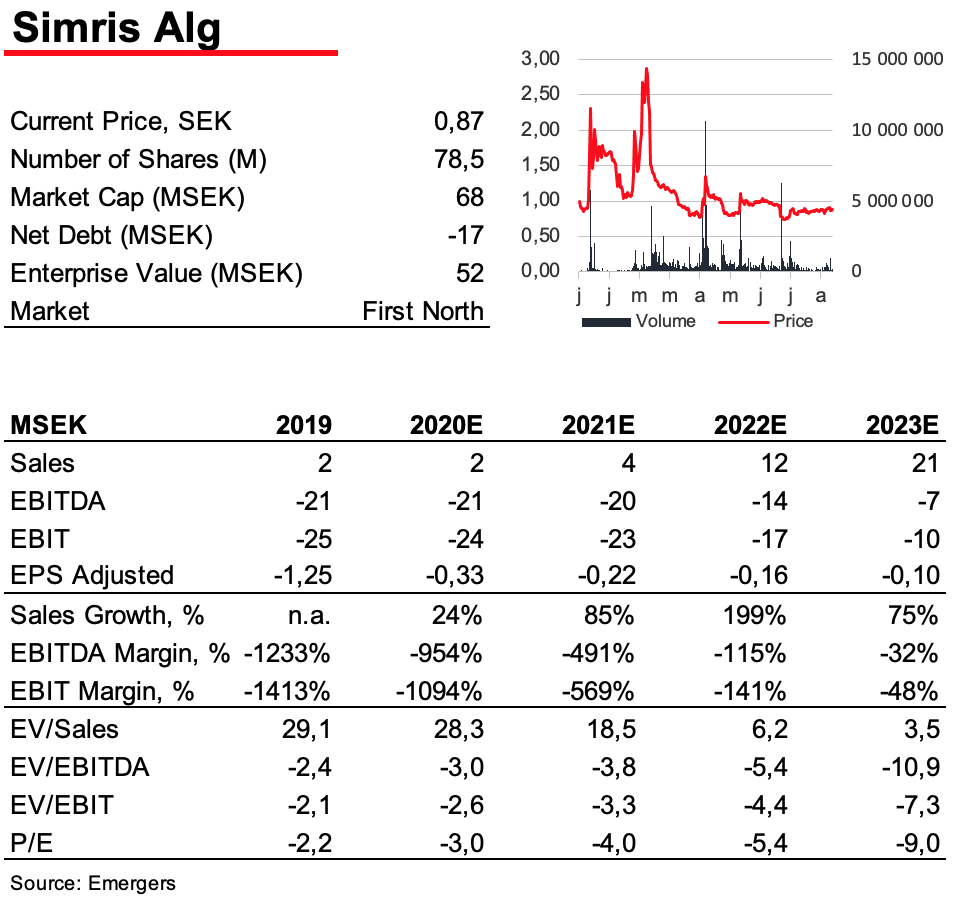 DISCLAIMER Information provided here or on Emergers’ website emergers.se is not intended to be financial advice. Emergers receives compensation for writing about the company in question. The company has been given the opportunity to influence factual statements before publication, but forecasts, conclusions and valuation reasoning are Emergers’ own. To avoid conflicts of interest, Emergers’ writers have no holdings in the listed companies we write about. Articles of analysis shall not be construed as a recommendation or solicitation to invest in the companies described. Emergers cannot guarantee that the conclusions presented in the analysis will be met. Emergers cannot be held liable for either direct or indirect damages caused by decisions made on the basis of information in this analysis. Investors are encouraged to seek additional information as well as consult a financial advisor prior to any investment decision. For more information and complete terms, please see here.